They’re beautiful, trendy and Instagram-friendly, but do these sparkly stones actually deliver on their promises? 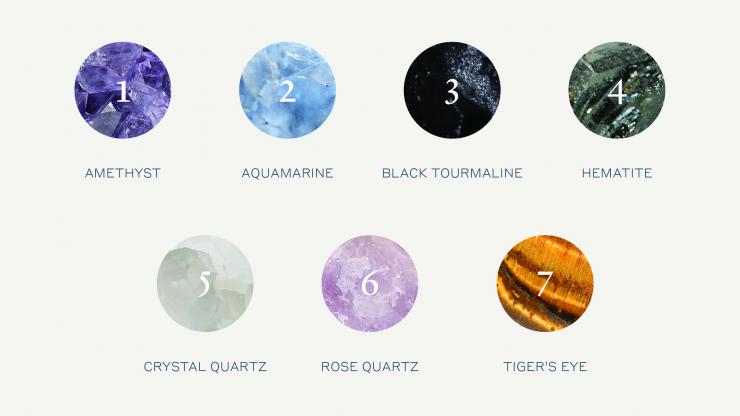 Crystals are everywhere these days — on your social media feed, on the shelves of your yoga studio and even adorning your friend's coffee table. Whether or not you're into the metaphysical, you've probably noticed that interest in these glimmering gemstones and what they might do for your well-being has spiked. Proof? Google searches for “the healing power of crystals” have increased more than 140 percent over the past year.

That's not to say they're a new-age trend. Our ancestors have been using them far and wide for centuries — from Ayurvedic healers to the ancient Egyptians, Greeks and Romans. “If you look back to ancient civilizations, everyone has used crystals and gemstones for some amount of time,” says Heather Askinosie, co-founder of Energy Muse, an online crystal shop. “They have a long history and they reinvent themselves for the time period they’re in.”

To unearth information about these mysterious materials, we tapped experts in crystals healing and psychology. Read on for the lowdown.

THEY ARE POWER SOURCES

“Crystals are like Mother Nature’s little gifts to us,” says Paige Novick, a jewelry designer and crystal healer. “They’ve been under the earth’s surface for thousands of years, so they have accumulated vibrations, which vary depending on size and form.”

Those vibrations as said to align with our internal energy systems, known as chakras, and can help us find more balance, according to Novick. “Chakra means ‘wheel’ and when someone’s balance is good, the wheel is spinning,” she explains. “When there’s a blockage and the wheel gets stuck, you have to work on your energy to ease the blockage.” Different crystals are meant to address different blockages.

That said, there's little scientific research to back up the mental or physical benefits — as in, none at all. The reason: According to science, illnesses are not caused by negative energy or wave lengths, so crystals can’t cure problems in the way that proponents explain it.

It could be that people using crystals are actually changing their behavior (unintentionally) in ways that will result in positive effects.

However, we're not saying that crystals are completely useless. In fact, they certainly can deliver health benefits via two psychological phenomena: the placebo effect and the self-fulfilling prophecy, explains Crystal I. Lee, Psy.D., a Los Angeles-based psychologist and owner of LA Concierge Psychologist (her name is just a coincidence!).

While people may downplay it, the placebo effect is real, and is backed strongly by scientific research. Essentially, it describes the positive effects people experience when they use something that they believe to be beneficial, even if it doesn’t have proven science-backed benefits.

The other way crystals can work is through the self-fulfilling prophecy — when someone predicts or expects something to happen, sometimes it actually does. It could be that people using crystals are actually changing their behavior (unintentionally) in ways that will result in positive effects, Lee notes. Or, because they believe something will happen, they pay more attention to the signs that it is happening, while ignoring the signs that go against their belief.

Finally, while crystals won't necessarily harm you, Lee does warn against relying on gem healing alone. In other words, if you're dealing with a serious medical issue (whether mental or physical), don't skip conventional medicine or treatments in favor of filling your home with crystals.

Even advocates of crystal healing acknowledge the limitations of their power: “Crystals don’t do the work for us — they are a tool,” says Askinosie. Said another way: “Crystals are not magic; the magic comes from us,” says Novick. “But the vibrations can align with our chakras to amplify what’s in us. They will get you there faster; they’re working behind the scenes to support our efforts.”

Lee agrees that crystals can be soothing, both mentally and physically. "People often turn to things outside of themselves to find comfort — be it religion, science or a higher power," she says. "Crystals can be seen as another ‘outside force’ that provides comfort. In that way, they can be helpful."

WAYS TO PROGRAM YOUR GEMSTONES

To get the most out of your crystals, you'll need to "program" the crystals with an intention, Askinosie says. It's pretty simple to do (if a little out there).

The first step is to cleanse your crystal, she says. Choose your preferred method of clearing:

Next, hold your crystal in your hands, close your eyes and take three deep breaths. "Connect with your highest vibration by focusing on your faith, the Earth and what makes you happy," Askinosie says.

Aloud or in your head, say: "I ask that the highest vibration of love and light connect with my highest self to clear all unwanted energy or any previous programming. I command this crystal to hold the intention of...”

To finish the sentence, add three intentions for your crystal — energies that you wish it to hold for you. End by repeating “thank you” three times. By saying it three times, you emphasize that what you’re asking for already exists in the universe.

People turn to things outside of themselves to find comfort — be it religion, science or a higher power. Crystals can be seen as another ‘outside force’ that provides comfort. 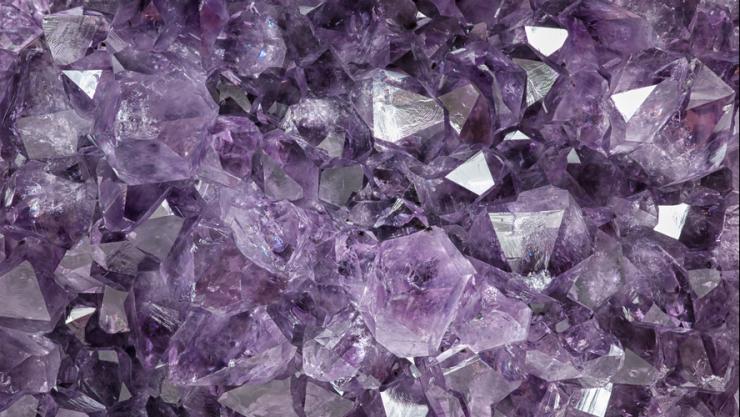 Due to its deep purple color, amethyst has traditionally been associated with Bacchus, the Greek god of wine.

WHICH ONES TO CHOOSE

Both crystal experts say you have to feel the stone to see if it’s the one for you. “There is always one that will stand out, so don’t overthink it,” says Novick. But if you’re looking for a place to start, here are seven suggestions:

Stimulating the third eye chakra, this stone helps promote calm and ease tension. It’s one of the more popular and well-known crystals and is a top choice for Novick to have in her home.

Water-colored stones, like this one, offer a peaceful presence, says Novick. It resembles the ocean and helps you communicate without anger or anxiety as it relates to the throat chakra.

Askinosie says people have been asking for a stone that helps them feel protected at work, and this is the winning gem for putting on your desk or wearing around the office. “It’s almost like an energetic body guard,” she says.

A dark stone connecting to your root chakra, this one has some weight to it, so it helps keep you grounded. Askinosie wears it on her ankle. “I touch it and breathe and just use it as a time to get back in my body and remind myself that it’s going to be a good day,” she says.

Tying into your crown chakra, this one makes you feel more connected to the universe, says Novick. It also helps you fight off negativity.

This gem looks like love, thanks to its pink hue. Place it in your bra or close to your body to carry a strong sense of love and compassion with you all day, Askinosie says.

The ultimate stone of empowerment, says Novick. The black color keeps us grounded to the earth, while the gold relates to our sense of personal power, confidence and focus. 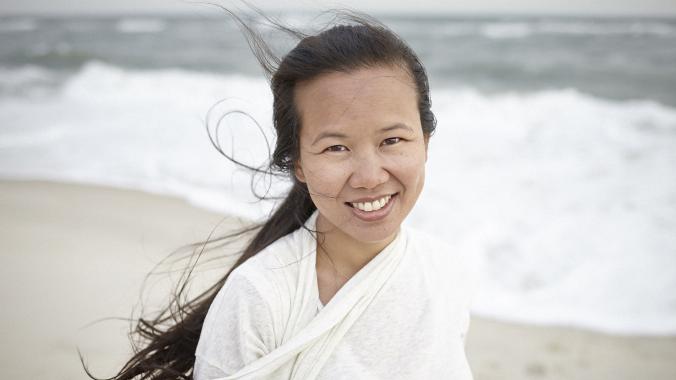 Our Director of Vibrational Energy Healing on her love of crystals, kittens and kundalini yoga 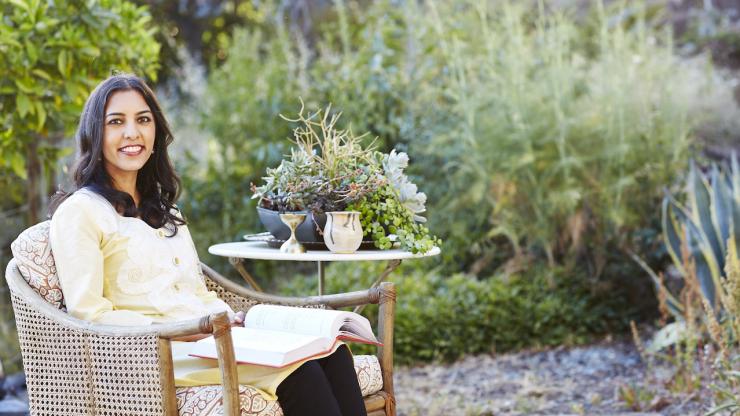 Our Director of Ayurveda on living a healthy, balanced and spiritual life 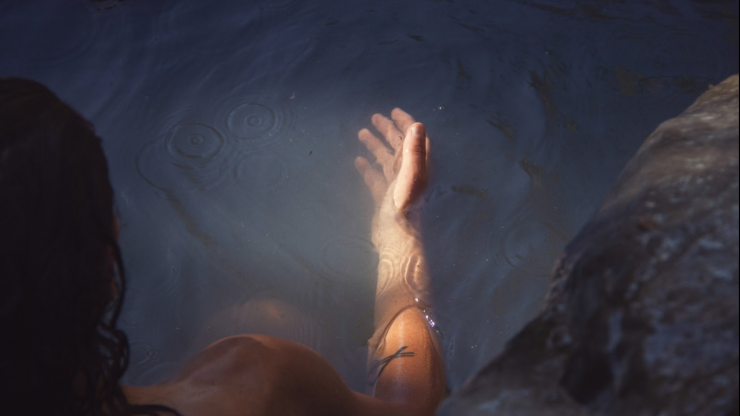 A Water-Healing Meditation to Try at Home

Draw a warm bath to experience this unique meditation, which emulates an ancient form of hydrotherapy.